The intent of this project was to use new rapid screening methods to identify chemicals that may be able to affect biological processes linked to the development of diabetes and/or obesity. The researchers screened 1860 chemicals and found that, “the spectrum of environmental chemicals to consider in research related to diabetes and obesity is much broader than indicated from research papers and reviews published in the peer-reviewed literature.”

The chemicals screened include pharmaceutical drugs, chemicals already linked to diabetes or obesity development (as “signposts”), pesticide ingredients, chemicals found in consumer products, and some “green” chemicals. The biological processes that they tested for include insulin resistance, pancreatic islet and beta cell function, fat cell differentiation, and feeding behavior.

Overall, they found that the chemicals most highly ranked are generally not the ones being studied for potential effects on diabetes or obesity, in current laboratory or human research studies. 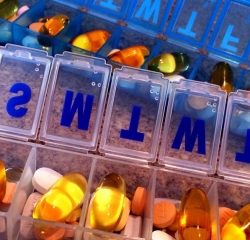 The “top 30” chemicals most likely to have effects on beta cells or islets include, for example, basic blue 7 dye (used to dye fabric), numerous pharmaceuticals, a few insecticides, a few herbicides, an “inert” pesticide ingredient, a flame retardant, a disinfectant, an air pollutant, a plasticizer, a few fragrances, a cosmetic ingredient, caffeine, a nitrosamine, and silica.

Now, before raising any alarms about these chemicals, please note:

The main point to take from this study is that numerous chemicals, largely unanalyzed for their potential effects on diabetes and obesity, have potential to play a role in these conditions. The study aimed to help develop hypotheses about which chemicals to test further, not to draw conclusions. Yet it also shows that the potential of chemicals to contribute to diabetes or obesity may be widespread.

4 thoughts on “Which Chemicals Are Linked to Diabetes and Obesity? Perhaps More Than We Think.”