Just in time for World Diabetes Day (#WDD, November 14th), I have started wearing an artificial pancreas to help manage my type 1 diabetes. Normally I wear an insulin pump along with a continuous glucose monitor (cgm), but the two gadgets do not actually talk to each other. That means I still have to manage my diabetes manually 24/7, like everyone else with diabetes. While manufactured artificial pancreases are being developed and are now performing well in clinical trials, they are not yet available to the public.

Thanks to CHE, I was able to attend the American Diabetes Association’s Scientific Sessions in Boston in June, where I met Dana Lewis and Scott Leibrand. These two extraordinary individuals, now married, worked to develop a do-it-yourself artificial pancreas for Dana by hacking into her insulin pump and cgm. They are doing this hacking both publicly (in talks with the FDA) and legally, working to make a safe, reliable, open-source artificial pancreas system: “The Open Artificial Pancreas System project (#OpenAPS) is an open and transparent effort to make safe and effective basic Artificial Pancreas System (APS) technology widely available to more quickly improve and save as many lives as possible and reduce the burden of Type 1 diabetes” (from Hacking Diabetes).

Since my husband Tim happens to know a little bit about programming, I texted him during the ADA meeting to see if he would be willing to try and make a pancreas. He said yes. He is awesome. Then I emailed my diabetes educator, and she just said, “Go for it!” With their blessings, and after talking to Dana and Scott about the legality of the effort, we decided to try to figure this out.

By “much of the time” I mean that Murphy’s Law is alive and well. I am now awaiting my 3rd battery system to arrive in the mail, as the other two have already failed. My son’s cgm sensor fell out of his arm last night, so obviously it can’t work without that. And those are only the technical glitches from the past 24 hours—there have been so many technical glitches over the past months that I can’t even begin to remember them all. But the beauty of this system is that if something goes wrong, it reverts to the regular insulin pump settings, so the worst-case scenario is just the regular life that everyone with diabetes deals with every day.

For the past two nights, my blood sugar has been flat and in range. I have actually slept through the night, in normal range, for almost the first time in 17 years. I already have more energy than I can remember.

My son is spending most nights with flat, in-range blood sugar as well, which means that we don’t have to get up at night to give him insulin or food.

However, I will say that this system is not a cure, nor even a magic bullet. We still have to give ourselves insulin manually when we eat, based on a simple calculation that includes grams of carbohydrates, grams of fat and protein, current blood glucose level, upcoming exercise, stress level, time of the month (hormones), amount we exercised yesterday, what we ate for breakfast, hypoglycemic events in past 48 hours, how long and how well we slept last night, vitamin D level, age of insulin infusion site, age of insulin, temperature, barometric air pressure, humidity, altitude…you get the idea of the complexity of managing type 1 diabetes. The system is also still limited by the characteristics of pharmaceutical insulin, which acts much more slowly than endogenous insulin, and takes longer to clear from the body. That means that so far, even wearing an artificial pancreas, I still get high and low blood sugars—especially if I do things like eat or exercise. Imagine.

But at night? So far, that is the real benefit for me. Diabetes is much easier to manage when you are not eating or exercising, as long as you are awake. To have something else take over so I can finally get some sleep, wow. Just wow.

Now, I might have more energy to work on what I really want to work on, which is figuring out what is causing the increasing incidence of type 1 diabetes, and how to prevent it. Did you see the new study that found that giving infants (at high genetic risk for type 1) probiotics in the first month of life successfully reduced their risk of developing type 1-associated autoimmunity? That is so exciting– this is one of the first type 1 diabetes prevention trials to actually have some success! See the abstract.

And speaking of the increasing incidence, did you see the new study from China that found type 1 incidence increasing at a rate of over 33% per year in children under five, between 2007 and 2013!? Wow. Why? We don’t know, but a number of other recent studies are finding links between air pollution and type 1 diabetes… hmmm….

For more on the potential causes of type 1 diabetes, including air pollution, see my website, www.DiabetesAndEnvironment.org. 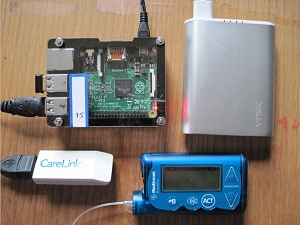 For more on the DIY artificial pancreas, see these sites:

And we can follow each other on twitter: @sarhoward and you can see my and others’ adventures at #OpenAPS and #WeAreNotWaiting.

5 thoughts on “I Am Now a Bionic Woman”